It did not seem to me that those hundreds of men and women who rushed to Ground Zero on the morning of Sept. 11, 2001, were heroes. They were just good people raised by good people and they answered the call.

We didn't know what to call them. So we called them heroes.

One of them was Sean Cummins, a New York City firefighter assigned to the Squad 1 firehouse in Brooklyn, which lost half its men when the Twin Towers came crashing down. 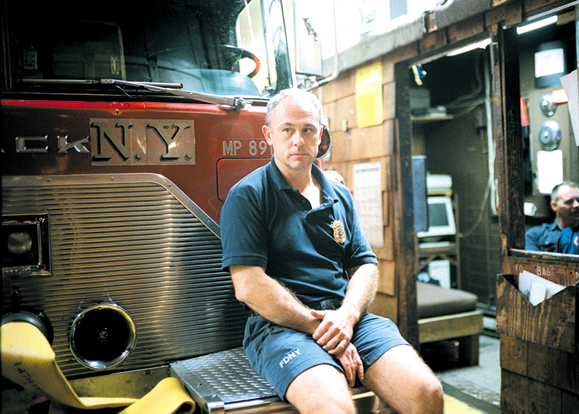 Cummins was built like a jockey, and because of his size and specialized training for tight, enclosed rescues, he spent thousands of hours at Ground Zero, digging and clawing through the muck and ash and steel.

On that first day, Cummins and firefighter Jimmy Lopez found alive an obese man pinned in a smoldering crag between buildings 4 and 5. The buildings were on fire and debris was still raining from the sky. The two men thought they were going to die, but found courage in one another. They carted the man to a medic wagon. He would be one of just 20 survivors.

In the ensuing months, Cummins found bodies -- or parts of bodies -- of another hundred people, including the nailpolished hand of a woman he gently tucked in the pocket of his bunker gear.

Reluctantly, he allowed me to write stories of him and his workmates – both the dead and the living – their widows, and their children. All of them were heroes in my mind.

One day the following April, we met for coffee in midtown Manhattan. Cummins was tired, and broken, and weary of the adulation being heaped on him and other first responders. The truth was, not every hero wore a badge and not every badge-wearer was a hero.

Cummins was haunted. And here I was, a pestering reporter trying to pry loose his pain, only to share his most intimate thoughts in The New York Times.

“Look,” he said as he set down his empty cup and stepped into the afternoon sun. “I'm done talking. Just wearing a uniform doesn't make you a hero.”

And with that, he was gone. You might say I'd lost another friend at Ground Zero.

A quiet retirement near a fateful battlefield

We have not spoken since – not in nearly 20 years. Then, this week, the telephone rang. He'd found me through the internet.

We do not know each other well, Sean Cummins and I. But ours is a friendship forged in horror, which makes it different. There is something familiar and forever in a friendship like that.

There was much to talk about. Cummins is a man of substance. He faded away into the exciting and obscure life of service, the sort who occupies the dangerous crevices that only other people of action ever see. The places the rest of us run away from.

He made the elite Rescue 1 with the FDNY, plucking children from burning apartment houses and such. He was a paratrooper with the Air National Guard and volunteered for Iraq in 2006. His unit suffered terrible casualties. Cummins said he felt it was his obligation to his dead brethren at Ground Zero to serve. When he returned home, he became a fire marshal.

Then he caught the Ground Zero sickness: cancer in his sinuses and dormant cells in his throat.

He took a medical retirement and moved to Gettysburg, Pa., of all places, working as a town guide. It reminded him of Ireland, he said, where he grew up on a farm. 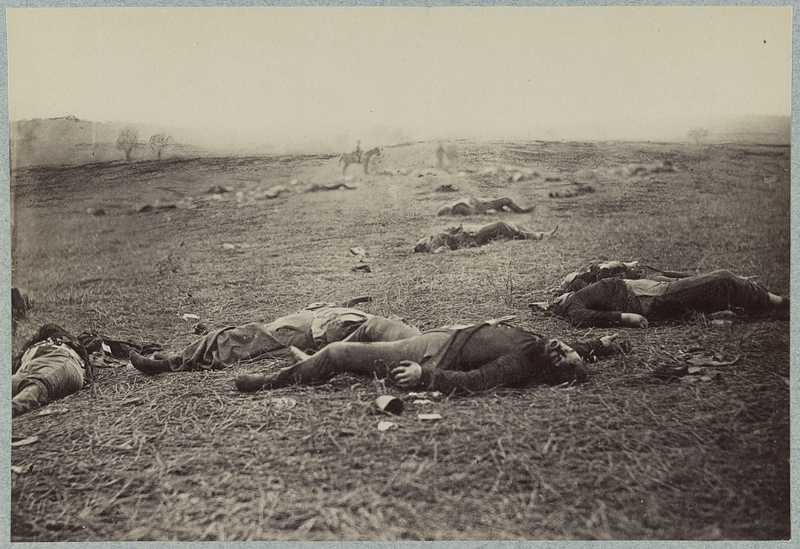 In green Pennsylvania fields, in concrete Manhattan canyons, the story is the same. (Photo: Library of Congress)

We talked of the battlefield photographers, who in 1863 dragged around the corpse of a Confederate soldier and posed it in positions of horror and glory. We spoke of the photographer at Ground Zero who hid the severed hand of some unknown human being underneath a traffic cone, waiting until the lighting was just right to steal a photograph.

That photograph now hangs in some museum. We laughed how the media hasn't changed all that much in 150 years.

We spoke of the aptly named Capt. Peter Generous, a soldier in the Michigan contingent, who gave his life at Gettysburg so the great American experiment might survive.

“I wonder what a man like that must have been thinking,” he said.

We talked about firefighter Steve Siller, Cummins' running mate at Squad 1. Siller's shift was over the morning of September 11. Driving home, Siller got word that the first plane had struck. He turned his truck around, drove back to Squad 1 and gathered up his gear. He then sped to the Brooklyn-Battery Tunnel, but the authorities had already closed it. Siller gathered his 60 pounds of gear and humped it through the tunnel underneath the New York harbor, only to meet his end in the Twin Towers.

“I wonder what a man like that must have been thinking,” I said.

We spoke of our children, and grandchildren yet to be. We spoke for nearly four hours and drank whiskey. I did not tell him I love him, but I'll say it now.

Cummins will return to the old firehouse in Brooklyn this weekend because his mind is better now.

And I will drive far away, and hide in a cabin. I will not watch the ceremonies or the documentaries. But I will think about Steve Siller and the substantial men and women who gave of themselves that Manhattan morning and the many mornings that followed.

I will think of Capt. Peter Generous and all those who serve their fellows.

And I will think of Sean Cummins, a friend I lost at Ground Zero who has returned to me.