Representing nursing unions these days is doing God’s work.  That might sound like hyperbole, but studies show that the quality of patient care increases when nurses unionize. Standing in solidarity with nurses just might save your life.

Hospital nurses get fired for going public with patient safety concerns, which is why they were opting to unionize long before the pandemic. Hospital managements in recent years have stretched nurses to the breaking point, increasing the ratio of patients they are responsible to care for while paying substandard wages given their responsibilities and health risks, as well as curbing their benefits. In addition to being treated badly by hospital managements, nurses are often disrespected by physicians and patients.

Nursing isn’t a job for the faint of heart.

Suicide statistics attest to the stress of working in nursing. Nurses are 18 percent more likely to commit suicide compared to individuals in the general population, according to a recent study published by JAMA Psychiatry. The study’s findings are even more alarming given they are based on data spanning 2007-18. It’s reasonable to assume that nurses experienced dramatically higher pressures in 2020 treating Covid patients and helplessly watching many of them die, as well as their colleagues. Another recent study reports that nurses have accounted for 32 percent of all healthcare worker-related deaths owing to Covid, and that nurses have died at nearly twice the rate of physicians.

Rather than address nurses’ concerns as they increasingly sought to organize, hospital managements instead opted to hire costly union-busting consultants to intimidate and frighten them. One example is Beaumont Health, whose CEO John Fox is the poster boy for all that’s wrong with U.S. healthcare. In 2019, well before the pandemic, nurses at Beaumont’s flagship hospital in Royal Oak sought to organize as the hospital’s decline was well under way. Fox spent nearly $2 million on union busters whose intimidation tactics were so successful the Michigan Nurses Association vowed it would never again seek to organize at Beaumont because of management’s “climate of fear.”

Union busters specializing in the intimidation of nurses is a fast-growing specialty, as hospitals prefer to spend big money on preventing nurses from organizing rather than remedying the causes driving them to unionize in the first place. Nurses increasingly are fed up, opting to leave the profession. As more leave, hospitals are required to hire nurses from temp agencies, who are often better paid than the nurses they replaced or work alongside with. That’s fueling a lot of resentment, and many veteran nurses are increasingly opting to work as temps, where they can make more money and often demand the patient ratios they are prepared to tolerate. It’s a vicious cycle, one of the American hospital industry’s own making.

“I did not sign up for (my hospital) taking advantage of the fact that I have a calling,” Theresa Adams, a veteran nurse at a Ohio hospital who quit to become a so-called “travel nurse,” told Kaiser Health News. “There is a difference between knowing my calling and knowing my worth.”

Although many U.S. hospitals are suffering severe nurse shortages, Beaumont is worse off than most. CEO Fox recently issued a public plea asking Detroit-area residents to avoid Beaumont’s eight-hospital emergency rooms except for critical care matters. Fox shamefully intimated that unvaccinated patients were responsible for taxing the hospitals’ resources, when in fact Beaumont had a paucity of Covid patients system-wide. Beaumont’s ERs were overrun because the nursing shortage forced the closing of entire wards, so patients in need of admission just lingered in the ER. At Beaumont Troy, an ICU patient was treated in the ER. 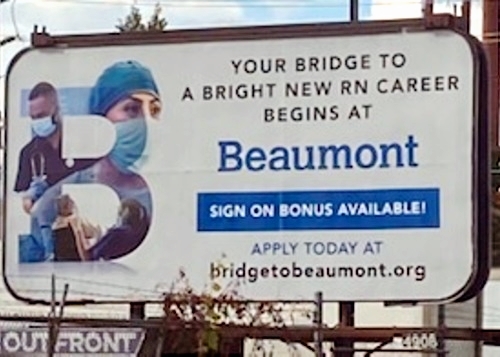 Beaumont is looking to recruit Canadian nurses in neighboring Windsor, as well as in the Philippines where other U.S. hospitals are on the hunt for nursing talent. That’s stressing the healthcare system in the Philippines, where nurses are leaving in droves because of what they say is poor treatment from hospital managements in their own country. According to the Private Hospitals Association of the Philippines, as many as 10 percent of that country’s nurses have quit in recent weeks, imperiling patient care nationwide.

Henry Ford Hospital also is looking to recruit nurses in Canada and the Philippines. However, HFH’s nursing shortage isn’t the result of HR mismanagement. The hospital system is said to treat its nurses “like royalty,” but has difficulty recruiting staff willing to work in Detroit.

Not Part of Community

Patient care suffers when a hospital’s staff isn’t part of the community. An 82-year-patient will receive more involved and compassionate care if she is recognized as the mother of Teresa, who heads the local parent-teacher association and whose daughter goes to school with the son of a tech who cleans surgical instruments.

Indeed, that’s how Beaumont deteriorated to the degree that it has. Fox’s primary home is in Atlanta, from where two of his two top aides commuted from. The former COO commuted from Grand Rapids. The rest of Fox’s senior management team also came from elsewhere and have since moved on to greener pastures. Michigan was just a job layover. They care little about the mess they left behind. 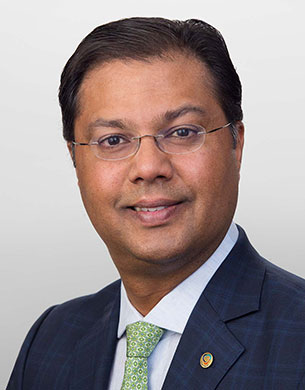 Saum Sutaria, who was named CEO of Dalas-based Tenet Healthcare last month, is another example of the callous hospital company CEO far removed from patient care. The hospital chain, which owns DMC and Sinai-Grace, last week reported a $448 million quarterly profit, and Sutaria proudly declared he was pleased with “how the enterprise performed in an environment that remains challenging, but full of opportunity.”

Sutaria made no mention of striking Tenet nurses at various hospitals across the country protesting what they say are unsafe conditions, including a Massachusetts hospital where nurses have been on strike for more than six months. Sutario’s bio says he spent more than two decades working at McKinsey as a leader in healthcare and private equity practices, which tells you all you need to know about his values and mindset.

Importing hospital CEOs instead of nurses would be a great step forward to reforming America’s broken and corrupt healthcare system. One need only look to Canada and the U.K. to appreciate the bargains to be had.

Beaumont’s Fox in 2019 earned $6.8 million to run his company’s eight hospital system into the ground. Based on the golden parachute paid to a predecessor, Fox could stand to make more than $30 million if regulators approve Grand Rapids-based Spectrum Health taking over the hospital network he destroyed. That’s on top of the more than $20 million Fox already received since joining Beaumont some six years ago.

The compensation disparity between U.S. hospital executives and their foreign counterparts is obscene. Fox’s possible more than $30 million golden parachute would provide a nice chunk of cash to attract some of the best-trained and most experienced nurses in North America to Beaumont. Breaking up Tenet’s 60 hospital systems would likely lead to an improvement in overall patient care, as the tens of millions of dollars wasted on overpaying top managers could be redeployed to hire experienced U.S. nurses rather than import foreign care givers.

Something to think about if you pass your local hospital and see striking nurses with signs protesting their working conditions and warning about patient safety issues. Let them know they have your support and treat them with the respect and admiration they deserve. Otherwise, U.S. hospitals will soon be overwhelmingly staffed with cheap foreign labor with no ties or cares for the communities they serve.

Reach Eric Starkman at: eric@starkmanapproved.com. Beaumont  Beaumont employees and vendors are encouraged to reach out, with confidentiality assured.

► To support Deadline Detroit's independent journalism, please sign up for a $3 a month membership or a one-time donation.

Columns by this writer: