'Defuse and de-escalate:' Detroit schools will have fewer armed officers

The Detroit school district's police department has a new name and new approach. 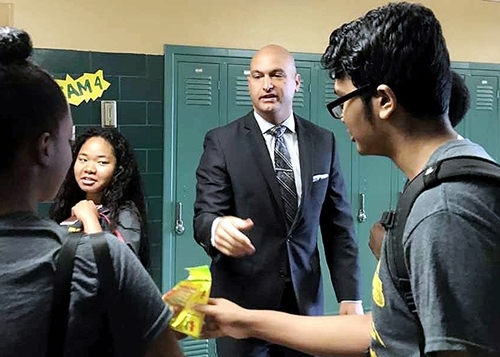 The change is part of an ongoing district effort to put more emphasis on building relationships, diffusing difficult situations, and restorative rather than punitive practices. ...

Rather than being permanently placed in schools, armed district officers will routinely patrol neighborhood high schools in response to large fights and allegations of criminal activity. Security guards would become the "primary safety position to support schools" on a daily basis, to be tasked with monitoring hallways and cafeterias and diffusing fights if necessary, [Superintendent Nikolai] Vitti said.

"We do not need an armed officer to do those things," Vitti said. ... "Our officers have to be trained and think more like guidance counselors, social workers [and] teachers than police officers." ...

He expects the revamped department to be fully staffed with security guards this month, the education news site adds.

Since the beginning of the school year, the district has hired 40 new security guards at a new pay rate of $16 an hour, with an additional 20 to 30 on track to be hired.

Prospective applicants can see the job posting here. Applicants need a high school diploma or GED certificate, and must pass a background check. Preference is given to those with credits in criminal justice from an accredited college or university.Those hired are represented by the Teamsters Union.

For assistance during the application process, applicants can should contact the district's Office of Human Resources at (313) 873-6897 or assistant director Caitlin Moore at caitlin.moore@detroitk12.org.