The problem, in this case, seems to be a matter of putting the press-conference cart before the board-briefing horse. 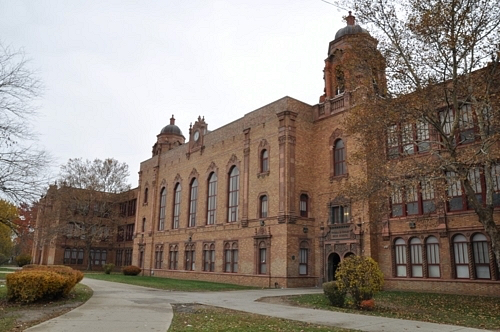 Life Remodeled, a local nonprofit, unveiled an ambitious $37 million plan Wednesday, to renovate and repurpose Thomas M. Cooley High School. However, two members of the Detroit Public Schools Community District, which owns the school and would have to sign off on its sale, are offended the board wasn't told about it first, and have indicated the board has no intention of selling.

Life Remodeled would locate various nonprofits at Cooley, including a pediatric mental health center and vocational college. A new football field would be constructed to provide recreational opportunities in the neighborhood.

The Detroit Public School Community District board would have to approve the sale of Cooley to Life Remodeled, and two members of the seven-person board have already indicated they are skeptical. The pair lambasted the nonprofit for holding a press event announcing its proposal before presenting the plan formally to the school board.

“I despise these sort of strong-arm publicity tactics,” Sonya Mays, a school board member, wrote on Facebook Wednesday afternoon about Life Remodeled’s press conference. “It has been made perfectly clear to (Life Remodeled CEO Chris Lambert) that Detroit Public Schools Community District is not currently marketing properties for sale. The District and the Board is (sic) painstakingly investing in a 20-year facilities plan. This plan will help to ensure that any vacant building or land that we do opt to sell is done so in a fair and equitable process – and not just in ways that most benefit the connected and privileged.”

Another board member, Misha Stallworth West, chimed in on the post, agreeing with Mays.

“We have been consistently engaging with and listening to Cooley community members since February of 2020 in order to discover their hopes. We have also been in ongoing discussions with DPSCD since February of 2020. We’re looking forward to continuing the conversation with the community and the School Board about our plans to formally submit our purchase offer to DPSCD in January with the hopes of transforming Cooley into an opportunity hub.”

Life Remodeled's plans for the building also include a pediatric mental health center and community center. Several residents of the neighborhood surrounding the 302,600-square-foot building appeared at the press conference to endorse the plan, financing for which remains unclear.