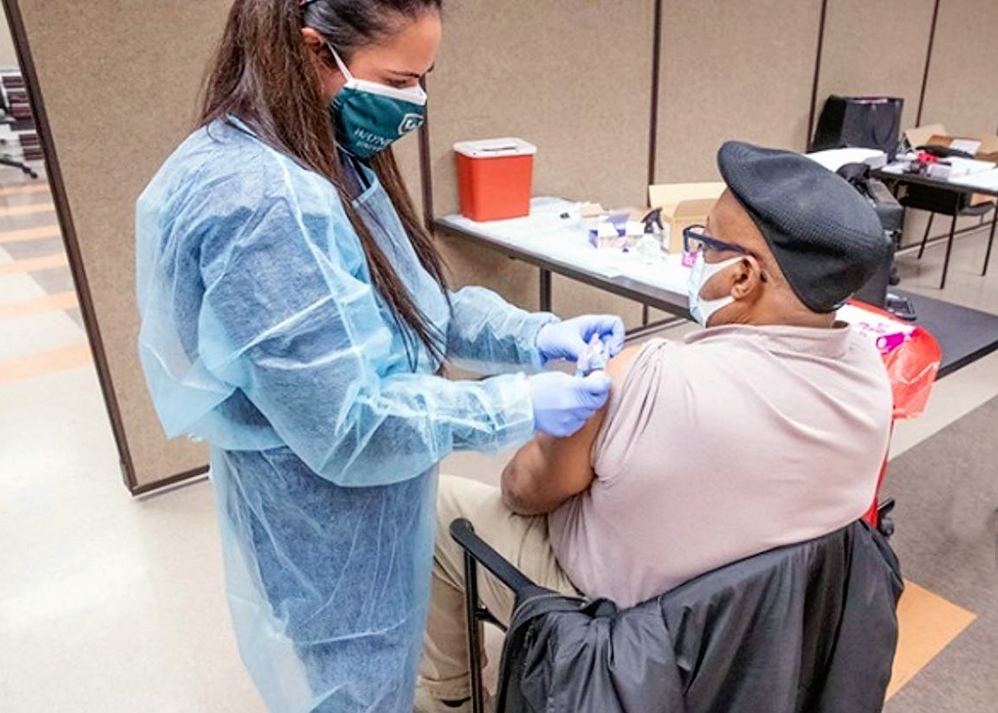 Vaccines are free and widely available. Get one. (File photo)

Metro Detroit is beginning to see breakthrough Covid cases in individuals who have had Covid booster shots, though the state hasn't compiled precise numbers.

"It's older adults, people living with problems such as cancer," Cunningham said. "I can think of about three off the top of my head.

"If you're a relatively healthy adult who was vaccinated and you get breatkthrough disease, it tends to be very mild unless you have serious other risks for bad outcomes."

A Beaumont Health System physician told Deadline Detroit late last week that he'd had the Covid booster shot and still contracted the virus. The doctor, who asked not to be identified, said he'd been experiencing mild symptoms -- congestion and cough -- and thinks it would be much worse if he weren't vaccinated.

"There are booster breakthroughs that are being admitted to the hospital," he said, echoing the Ford doctor, explaining that many are elderly, over 80 or have compromised health status conditions. "They can get pretty sick."

"But the people who are really sick are the non-vaccinated. Some are young adults." He said the shots help many keep symptoms to a minimum, or at least prevent them from being hospitalized.

State and national healthcare workers are paying particularly close attention to Israel, which became the first country to offer boosters shots after finding the effectiveness of the two-dose Pfizer vaccine waned over time, particularly among seniors. Israel is offering boosters to everyone 12 and older.

The Jerusalem Post earlier this month reported 10,600 breakthrough cases with booster shots out of 4 million people in Israel, which comes to 0.27 percent. It noted:

As more people in Israel received a third jab, the number of daily cases rapidly started to decline. In the second half of August, Israel was averaging 8,300 daily cases. Today, it is averaging only 480.

"The vaccines are great at preventing hospitalization," said Dr. Cunningham at Henry Ford. "If you look at the Israeli data, they found after two doses, five or six months later, two and half percent of the healthcare workers had mild to moderate Covid-19. So, vaccines are great, extremely effective against hospitalization and death, but it's not going to stop all the cases."

The breakthroughs are a reminder that none of the shots, including boosters, are 100 percent effective, and that other precautions should still be taken, health experts say.

In August, the Food and Drug Admnistration gave the green light for supplemental shots for those with compromised immune systems. And on Friday, the FDA authorized booster shots for both the Pfizer and Moderna vaccines for people 18 and older, while the Michigan Department of Health and Human Services issued an advisory advising people to wear masks indoors.

Late last week, the state reported 8,990 new cases a day for Thursday and Friday. Michigan currently has the highest rate of infection in the nation per 100,000 people.

To date, the state of Michigan and the Center for Disease Control tell Deadline Detroit there is no data yet on breakthroughs for booster shots. Breakthrough cases for double-vaccinated people is about 1 percent in the U.S.

"We do not expect to have adequate data until early next year since that is an effort that only recently started," said Lynn Sutfin, spokesperson for the Michigan Department of Health and Human Services.

Dr. Cunningham emphasizes regardless of vaccination people should wear masks indoors as Covid numbers continue to rise in the state.

"The numbers look pretty terrible," he said Friday. "I think over the next month we're going to continue to have more cases. I don't see this getting better for at least another month unless people really start changing behaviors like wearing masks."

"I'm boosted. But I am still going to wear my mask indoors. I think outdoors things are a lot less risky, especially if you're spaced out but indoors, going to the grocery store, going to Target, I think it's time for us all to wear masks."

"It's not just to stop Covid. We're starting to see influenza as well in Southeast Michigan.So that's just another thing that masks will help prevent."

He said its possible we'll see more booster shots in the future or possibly a tweak in vaccines to adjust to variants.