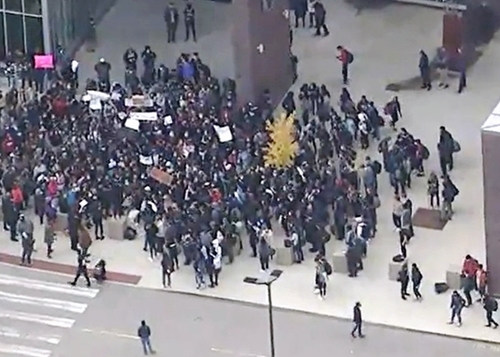 A 15-year-old Bloomfield High School student's family is suing the district, saying it "fails to provide African American students and their parents with a safe, healthy and non-descriminatory learning and general environment."

The $150-million class-action suit alleges that students and parents are subjected to racist pronouncements and discriminatory practices. White schoolmates often are heard in hallways using the N-word and variations of it, the suit says.

The federal court filing Thursday in Detroit does not name the student plaintiff, only her parents, Cedric McCarrall and Carmen Davison-McCarrall. It names as defendants, the Bloomfield Hills School District and high school principal Charlie Hollerith and school Superintendent Patrick Watson.

The suit was filed nearly a week after several hundred Bloomfield Hills High students walked out of school, claiming administrators haven't responded adequately to recent racist incidents. About a dozen parents joined the protest outside the building.

The suite alleges that the administration hasn't addressed racism and "racial bullying" in the school and treats white students differently.

The school also treats complaints differently from parents of African American and bi-racial students and ignores emails and phone calls "adressing troubling treatment" of their children , the suit alleges.

In an email to the community Wednesday night, Superintendent Watson said the district was working with student groups and “will continue to formulate a plan of action with district leadership in the coming weeks," The Detroit News reports.

Earlier this month, the suit says, the teen complained to a counselor about a red-lipped Black doll hanging from a noose that appeared over a second-floor banister. Video of it circulated on social media.

The student was upset and complained to a counselor, who told her it was part of a project by a white teacher. The doll was later dragged down the hall by a white student, the suit said.

Additionally, this month a white femaile student said "nigga" in front of class. When the Black student complained, the teacher said it was "only dark humor."  The white student was not disciplined.